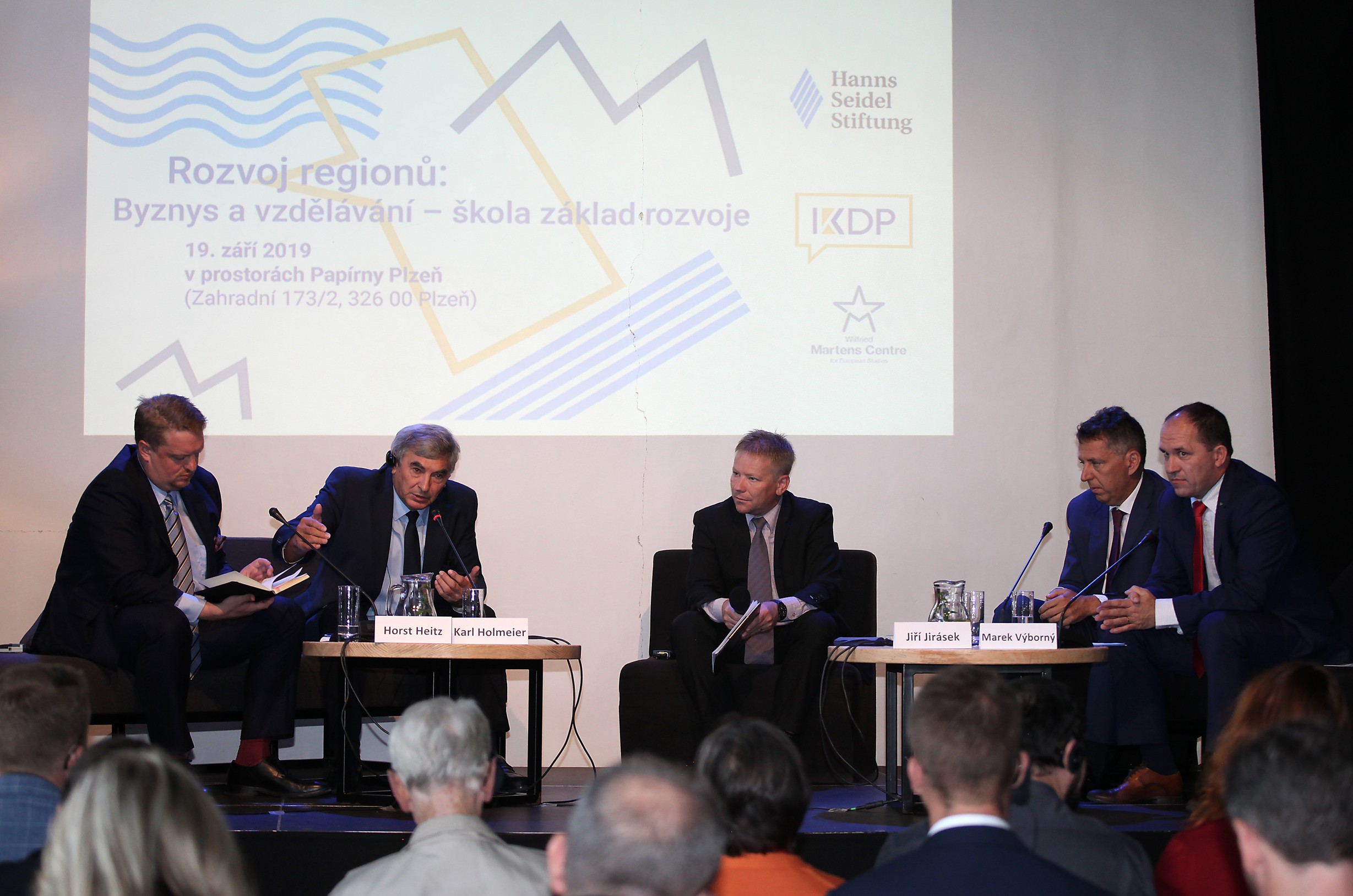 Regional Development: Business and Education – School as the Basis of Development

On September 19, 2019, IKDP organised in cooperation with the Hanns Seidel Foundation and the Wilfried Martens Centre for European Studies a conference on the topic of regional development, named “Regional Development: Business and Education – School as the Basis of Development”. It took place in Pilsen in the venue of former paper mill named even in the present time “Papírna Plzeň”. As one of the speakers of the event mentioned, the former use of the premises was quite symbolic to the topic of the conference. The conference was simultaneously interpreted from/to Czech, German and English languages and moderated by Mr Stanislav Jurík who often works in the Czech Radio.

The aim of the conference was the thought that wherever there is a good school, pupils/students come to the region to study there. And if the school is connected with businesses or businessmen, cooperates and in a way updates the educational plan according to the needs of the business(men), meaning that the graduates of the school can start working in the field they studied immediately after the graduation, the more the school is sought after.

Therefore, it is best that such schools working in a way with businesses or businessmen are placed all over the country, not only in big cities, but also in smaller towns as well as villages. Parents would feel better, was it easier for them to decide which school to enrol their children on, knowing they easily ensure a good future for them; pupils/students would know they get employed well and easily after the graduation in the very region; and families would have a good life all over the Czech Republic. At the same time, the businesses would know it is worth it that they stay in the region, that they would easily find enough skilled employees there, and no-one would need to move to the suburbs of big cities. The municipalities would in the same manner keep more young families or attract new ones.

The event was organised under the auspices of Mr Marek Výborný, member of the Chamber of Deputies of the Czech Parliament and Vice-Chairman of its Subcommittee for Regional Education, and the chairman of KDU-ČSL, who held the keynote and opening remarks in the meaning of the above-mentioned two paragraphs. The director of Hanns Seidel Foundation in the Czech Republic, Slovakia and Hungary Mr Martin Kastler was given the word then to open the conference too.

Mr Výborný further presented his view as the first speaker of the first panel. Mr Jiří Jirásek, Mr Karl Holmeier and Mr Horst Heitz followed. Mr Jiří Jirásek as the member of board of Association of Small and Medium-Sized Enterprises and Crafts of the Czech Republic and CEO and chairman of board of Czech-Moravian Guarantee and Development Bank (ČMZRB, a.s.) introduced what he/they do and what the situation is in the Czech Republic in the point of view of Czech businesses and businessmen. Mr Karl Holmeier as the member of Parliament of the Federal Republic of Germany and member of German Federal Parliamentary Group for Slovak Republic, Czech Republic and Hungary introduced the situation in Germany and the point of view of the borderline region saying also that it is important that inhabitants of the region to a certain distance from the borders of the neighbouring country (here Bavaria/Germany and the Czech Republic) shall learn the language of the neighbouring country – only then, it would be possible for our economies to “blend” into one. He also said that it is crucial that people are further educated already during their employment, not only once they appear unemployed on the list of the employment office. The first panel was topped off by Mr Horst Heitz, the executive director of SME Europe, who introduced the European level, point of view of the EU. In the discussion, Mr Výborný furthermore e.g. mentioned that in the Czech Republic, sadly, the school system focuses each pupil/student on one profession, that we lack some kind of adaptability on more professions here – it is difficult to estimate in which direction the industry will develop in the future, i.e. which professions will be demanded for in several years – it may very well be that the demand will be for other professions than the pupils/students are being prepared or educated nowadays.

The second panel was commenced by Mrs Ivana Bartošová, Deputy Regional Council President of Pilsen Region who is specialised in Education and Tourism. Mrs Bartošová introduced the situation of cooperation between schools and businesses in the Pilsen Region and among other interesting things she mentioned that free-time, hobbies-like activities on high schools are very often led by professionals in those very fields. Also, in the Pilsen Region, there is the highest percentage of pupils willing to enrol / enrolling in the three-year vocational high school programmes finished by gaining an apprenticeship/vocational certificate. She was followed by Mr Rostislav Študent, director of Secondary Technical School of Mechanical Engineering and Secondary Vocational School of Professor Švejcar in Pilsen who was added to the programme quite last-minute and shared his good experience of the school working together with companies and businessmen. The third speaker was Mr Filip Uhlík, director of Regional Development Agency of Pilsen Region, who inter alia mentioned that there are fields in which the demand of companies to cooperate with schools exceeds the number of such schools. The last speaker of the panel was Mr David Hruška, director of Secondary Agricultural and Veterinary School in Lanškroun, who e.g. pointed out that teachers of especially technical or specialised subjects should be given more time for self-education and/or watching of current development and trends in their fields, as it can be quite often heard that especially the older generation of teachers do not teach according to current development.

The conference was summed up and closed by Mr Gavin Synnott, a representative of Wilfried Martens Centre for European Studies.